The mystery of a Picasso unveiled by scientists 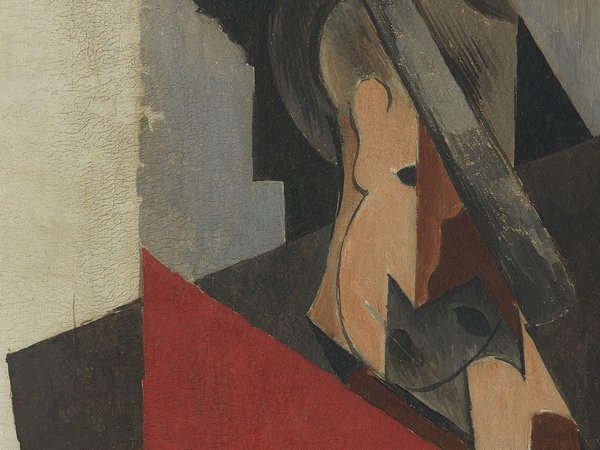 In the summer of 1917 in Barcelona, Picasso worked on four paintings inspired by Ballets Russes, using a similar set of material for all of them, including seven pigments, drying oils, animal glue, and canvas. The four paintings remained in Picasso’s family home until 1970 when they were donated to the Museu Picasso in Barcelona.

A century after it was created, the painting “Hombre sentado” (Seated man) seemed to be in precarious conservation conditions which were worse than the other three paintings in the series. Experts observed numerous superficial cracks and the museum decided to restore the painting, but it wanted to go deeper — it wanted to understand why such similar paintings, which had been stored in similar conditions for a century, were so different.

The ‘case’ was entrusted to an international, multidisciplinary team of conservation scientists, which included Francesca Izzo, a researcher in Sciences and Technologies for the Conservation of Cultural Heritage at Ca’ Foscari University of Venice. The project ProMeSA (Study of the mechanical and dimensional properties of commercial paint films), coordinated by Laura Fuster-López, professor of Conservation at the Universitat Politècnica de València, has recently been completed and the results have been published in the scientific journal SN Applied Sciences.

‘The project focused on the combined study of chemical composition and of the physical-mechanical degradation processes that characterise modern and contemporary artwork’ says Laura Fuster-López. ‘Because not all problems share a common cause, and given that artwork silently and constantly degrades, even in controlled environmental conditions, researchers need to understand which inherent properties in the materials used by artists can be at the root of their instability over time, in order to adopt preventive measures for the conservation of our collections.’

The four 1917 Picasso paintings became the testing ground for researchers to explore the correlation between the material used by the artist and their conditions. The adoption of a multi-analytical approach and the use of advanced technology enabled the scientists to study every layer of the painting and to obtain information that was invisible to the naked eye. The outcome of this research is the first study that analyses the issues of mechanical degradation of Picasso’s paintings with a scientific, analytical and diagnostic approach.

Francesca Izzo, who is an expert on artistic painting of the 20th and 21st centuries, focused on the exploration of the paint layers and the ground layer.

‘The analyses we conducted show that Picasso used oil paints, which contained both traditional linseed oil and less drying oils, such as safflower and sunflower oils’, says Izzo. ‘Furthermore, in one case we believe that the artist experimented with the use of semi-synthetic paint that was not yet common in 1917. Picasso painted on cotton canvas and applied two ground layers: the first was obtained with animal glue and the second with drying oil. In both cases, various pigments were mixed in (such as white lead, barite, zinc). Moreover, it is interesting to note the presence of so-called “metal soaps” — compounds that originate when the binder interacts with some ions released by the pigments. Metal soaps can cause clearly visible damage, both on an aesthetic level and in terms of chemical and mechanical stability.’

The results obtained have been combined with the visual examination of cracks and mechanical problems, in order to develop hypotheses on the differences in degradation among the four paintings. This is one of the first situations in which researchers have adopted a non-invasive documentation approach and observations of mechanical damage to gain insight into the possible contribution of each layer to the degradation observed.

The interaction of pigments and binders may have made paint films more or less subject to degradation. The same has been observed in the layers beneath the paint film: differences in paint thickness, varying pigment-binder interactions and other minor differences may have caused different reactions to similar environmental conditions.

The study of this case has given rise to new questions and ideas for further research. Scientists are trying to understand the impact of the possible ‘migration’ of material between the paint layers and the ground layer.

Thanks to these new results, Reyes Jiménez de Garnica, Head of the Department of Preventive Conservation and Restoration of the Museu Picasso in Barcelona, will be able to refine the strategies for preventive conservation and assessment of the conservation conditions (in particular of humidity) and exposure of the artwork.

The project was an international effort. In addition to the Universitat Politècnica de València, Ca’ Foscari and Museu Picasso, it featured the contribution of the Institute of applied physics "Nello Carrara" (IFAC), Escuela de Conservación y Restauración de Bienes Culturales de Aragón, The Royal Danish Academy of Fine Arts and Queen’s University (Canada). The international research team will continue the collaboration with Museu Picasso to study some of the masterpieces of the Spanish artist.