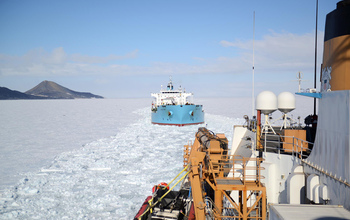 The USCGC Polar Star escorts a tanker through the sea ice of McMurdo Sound.

New Zealand has granted the United States permission for a U.S. Coast Guard icebreaker, the USCGC Polar Star, to visit the port of Lyttelton later this month. The icebreaker will make the port call on its way to its home port of Seattle after completing a resupply mission supporting the U.S. Antarctic Program (USAP), which is managed by the National Science Foundation (NSF). The U.S. embassy in Wellington announced the port call earlier this week.